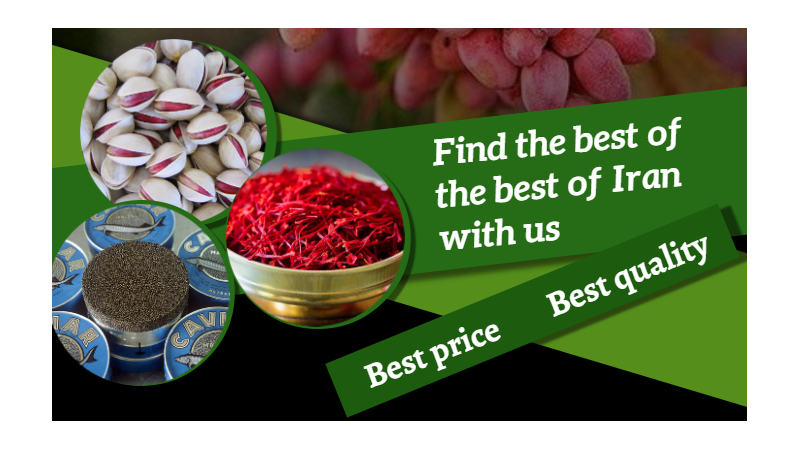 We can deliver the best Iranian caviar, saffron, pistachio and other agricultural products to anywhere in the world. 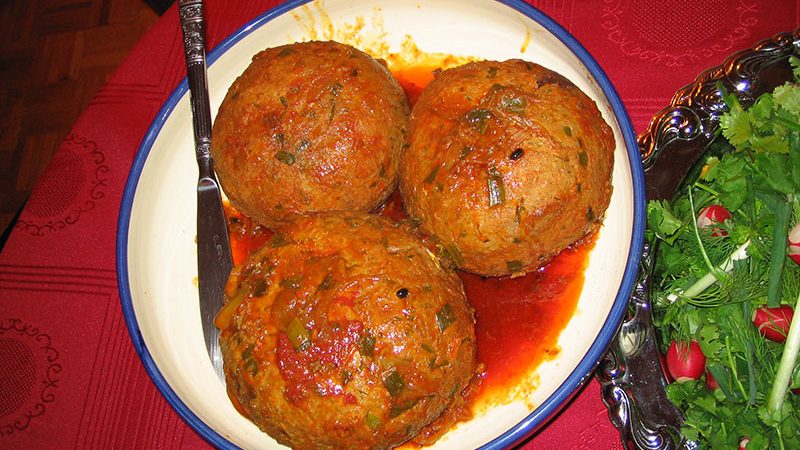 Koofteh Tabrizi is a super meatball stuffed with dried fruits and berries, also a variety of nuts. There are some other interesting fillings for this very traditional Azeri dish that are worth mentioning. One very common item is a peeled hard boiled egg that is placed inside the koofteh along with nuts and dried fruit. The yellow cooked yolk surrounded by a ring of white makes a pretty presentation when you cut into the koofteh, so you might give this a try if you like. I personally prefer not to, simply because I think it takes up the space that I can fill with my favorite dried fruits and nuts that are more flavorful.

Ground beef, pieces of onion and cooked split peas are processed by a meat grinder attachment or a food processor until uniform and paste like. The rice and bulgur are cooked in water with some salt, turmeric and butter until most of the liquid is cooked off and the grains are tender but firm inside. In a large bowl the meat mixture, cooked rice mixture, eggs and spices are mixed until blended. Cover the bowl and refrigerate overnight.

Peel and slice 2 large yellow onions. Fry the onions in butter until golden brown. You will be dividing these fried onions and use them in the sauces (for cooking the koofteh and for the Tilit sauce), for filling, and for the garnish. Prepare the sauce (according to the recipe) in a large 12-inch stockpot or divide the recipe and make it in two 10-inch stockpots. Bring it to a slow boil, then turn off the heat and set it aside until all the Koofteh(s) are stuffed.

Add herbs and salt to the refrigerated ingredients. Knead the Koofteh mixture with your hands several times to blend well. Then comes the part that name Koofteh (to be beaten) comes from: Pick up handfuls of the ingredients, raise it above the level of the bowl and throw it back in the bowl (as you can see I had a pair of helping hands for this part!) Repeat this with the rest of the batter. This picking and throwing down will be done several times until you have a smooth paste that easily sticks together and will not fall apart when you pick it up in your hand.

Use a 10-ounce bowl to divide the paste into 6 equal meatballs. Divide one of the meatballs in two

Have the fillings ready for 6 koofteh. Have a small bowl of water near your work station.  Add 1/2 tablespoon water to the same 10-ounce bowl that you have used for making the meatballs. Add one half of the meatball in the bowl and use your fingers to spread it in the bottom and all the way up the sides of the bowl.

Invert the bowl and tap it a few times on the palm of your hand to release the meatball. Pass the meatball from hand to hand 5-6 times until there is no visible seam. Repeat this with all of the meat balls. Bring the prepared sauce to a low boil over medium low heat, or a little higher to maintain a low boil.

Gently slip the stuffed Koofteh one by one into the sauce that is gently boiling. Do Not move or turn the koofteh at any point after you put them in the sauce. The sauce should be boiling gently so the koofteh starts cooking and setting, as soon as it is placed in the sauce. Add the rest of the koofteh(s), there will be almost no space between them and it is okay. While maintaining a low boil cook the koofteh without covering it for 30 minutes. By the end of this time the koofteh will start changing color and the top will feel firmer to touch. Baste the tops with some of the broth, lower the heat to low and cover the pot. Simmer for the koofteh for 1 hour and 30 minutes. Baste the tops a few times during this cooking time. At the end of this time the sauce will have a clear layer of oil rising to the top. This is called “be roghan oftadan” or “ja oftadan,” and it means your long awaited Koofteh Tabrizi is cooked. Turn off the heat and let koofteh sit in the pot for about 15 minutes. Most of the liquid in the pot will be absorbed by the koofteh(s) and there will be some thick sauce left in the bottom of the pot. You will be removing all the koofteh plus the thick sauce out of the pot. Next, a thin sauce is made and mixed with half or all of the thick sauce, depending on how many koofteh(s) you decide to serve . You have the option to either serve all 6 Koofteh or serve 3 and freeze the rest. 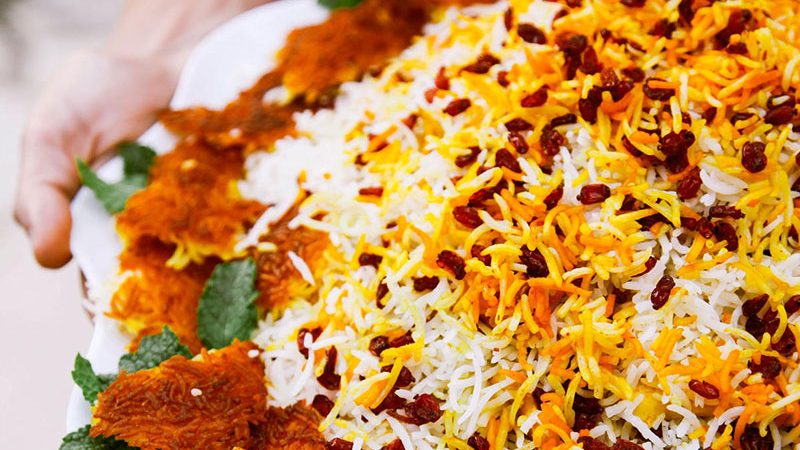 There are a couple of different ways to make Zereshk Polow. Some folks layer the rice with zereshk and steam them together while others simply make a chelow and add the zereshk on top. Personally, I am a fan of the first method as I think that the polow as a whole tastes better. With this said the zereshk changes color in the steaming process and goes from a gorgeous bright ruby red color to a dull brownish color. So at some point I came up with an idea where I hold on to a little bit of the zereshk and sprinkle it on top of the rice when it’s time to serve it.

Scoop out 2 cups of rice for your recipe in a bowl. Wash rice several times until water runs clear. Soak rice with salt either over night or at least about an hour. It’s not the end of the world if you don’t soak, but it does make a difference.
Bring water to a boil. Add salt. Place rice in, minus the water that it was soaked in.  Keep an eye on it, as soon as the water starts boiling again it should take about 10 minutes for the rice to cook.

While the rice cooks gently scoop the rice from the bottom of the pot and bring to the surface and release. Do this step several times.  NOTE: Do not stir.
Place a colander in the sink. You might want to choose a colander where the holes are small so that the rice won’t escape.
Check the rice to make sure it is cooked. It should be soft and cooked but not mushy.  Drain rice in colander. Rinse with cold water to stop cooking process. Now Your POLOW is ready!

Pick over the zereshk and remove any steams or stones you may find. Then soak in water for about 5-10 minutes. I find the best way to do this is by placing the zereshk in a colander and submerging it in a bowl full of water. Rinse zereshk after soaking.
In a skillet melt 1 tablespoon of  butter then add zereshk. Add sugar and give it a nice stir so that the zereshk is coated with butter and sugar. You will see that it will start to plump up!  Add 2 tablespoon saffron water and let the zereshk absorb the liquid for about one minute. Turn off heat.
Begin layering rice. Prep tahdig in any method you prefer. This time I used canola oil, water and 1 tablespoon saffron water.

Place one layer of rice.

Sprinkle about 1/4 tsp of advieh. Top with some of the zereshk.
Repeat layers until the last layer is rice  reserving about 1/4 of a cup of zereshk for later.
Create 4-5 holes in the rice with the back of your spatula.
Melt 1 tbsp of butter and mix with 1 tablespoon of Saffron water and 1 tablespoon of water. Pour all over rice. Finally steam rice on low for one hour.

Generally, Zereshk Polow is served with chicken. You can either add some cooked chicken as you layer the rice or simply serve it on the side. 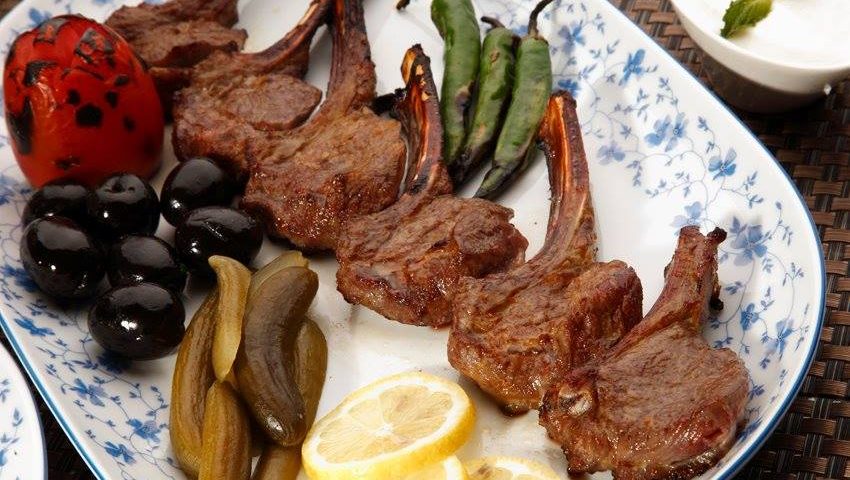 Iran is the land of Kebabs

In Iran, fresh herbs, pomegranates, dried plums and prunes, raisins, apricots and saffron are generously consumed in the process of cooking, giving the food a delicate and moderate flavor which is not too spicy, too sour, too sweet or too salty.

Chelow Kebab which is relatively simpler than the other recipes, is considered Iran’s national dish and served throughout Iran today, though was traditionally associated with the northern part of the country. Chelow Kebab is steamed, saffroned Iranian rice and kebab, of which there are several distinct varieties.

Kebab Koobideh: Koobideh is the Iran’s signature Kebab and the most famous of them all. It is made from ground lamb, beef or chicken mixed with chopped onions. Koobideh refers to the style that meat was prepared, originally placed on a flat stone (precisely a black flat stone) and was smashed by wooden mallet.

Shishlik or Shish Kebab: Shishlik meaning skewered meat is originally made of lamb and popular in many countries. In Iran, it is grilled meat with bones, previously marinated in onion, olive oil and saffron.

Kebab Torsh: Kebab torsh is a traditional kebab from Gilan province in Iran. It is made with beef – usually sirloin or tenderloin – marinated in a paste made of crushed walnuts, pomegranate juice or paste, chopped parsley, olive oil, and crushed garlic.

Kebab Soltani: The combination of one Kebab Barg and one Kebab Koobideh is typically called soltānī, meaning King’s (meal).

Kebab Torki: Kebab Torki aka Turkish Kebab is same Doner Kebab and Shawarma in other countries. In Iran it is served in big pita breads with stir fried veggies.

Kebab Bakhtiari: Kebab bakhtiari is a combination of jujeh kebab and kebab barg in a decussate form.

Kebab Chenjeh: Chenjeh is pure meat and very similar to western steaks. However, unlike most of Iranian Kebabs, onion is not used in prepration. Chenjeh is usually made from the meat of newly slaughtered sheep, when it’s still soft and fresh.

Mahi Kebab: Mahi Kebab or barbecued fish is popular in both northern and southern Iran, particularly in Caspian sea and Persian Gulf regions. However white fish (Caspian Kutum) from the Caspian Sea is among the preferred type for the dish. 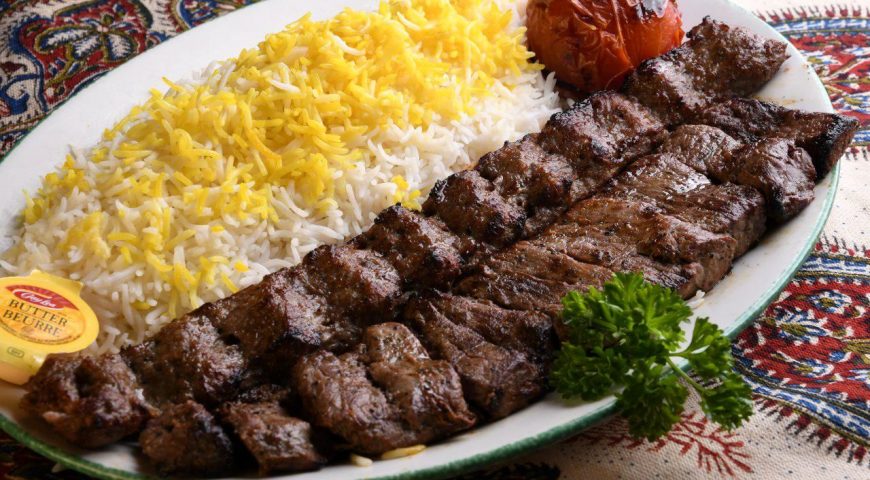 Serve with hot Polow (Chelow) or on Iranian bread. If serving with rice, may be topped by butter and some sumac. If kebab-e koobideh was made in an oven, the juice from the kebab can be poured on rice or bread.

The preparation of Iranian polow (chelow) is a delicious non-sticky rice, normally served with kebabs or any of the main Persian dishes.

Wash rice twice and soak in salted warm water for 2-3 hours, then drain the water. Pour water in a large pan until it is half-full and bring it to a boil.

Add rice and a spoonful of salt and continue boiling until rice slightly softens. (The rice should become soft but slightly chewy. Experience makes perfect. ) Pour rice into a drain and wash it with slightly warm water.

Pour 3 spoonfuls of cooking oil into the pan and add rice. Pour 3 spoonfuls of butter and 1 spoonful of saffron over rice. Cover the pan and cook over low heat for about half an hour. If cooking time is increased, a delicious crispy layer of rice (called ta-dig) will form at the bottom of the pan. But be careful, not to burn it. 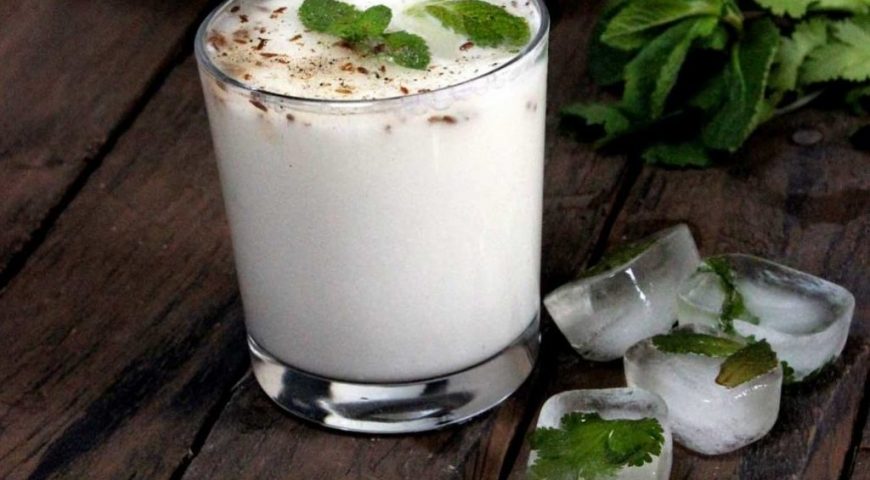 Doogh is a classic Iranian drink – refreshing, minty and bubbly! Perfect to cool you down or to wash down a big Persian meal.

In a small pitcher whisk together the yogurt, club soda and seasonings.
Fill two glasses with ice and divide doogh evenly between the two glasses.
Garnish with fresh mint and serve.